James Harrison net worth and salary: James Harrison is an American football player who has a net worth of $12 million. A four time Pro Bowl selection, James Harrison gained his net worth as a linebacker mainly for NFL team the Pittsburgh Steelers. During his college career, Harrison played for Kent State University.

The 6ft player was signed as an undrafted free agent by the Pittsburgh Steelers in 2002. His made Harrison the first Kent State alumnus to play at linebacker for the team since Steelers legend Jack Lambert. He spent a season with the team before signing to Baltimore Ravens in late 2003 then sent to NFL Europe's Rhein Fire. After being released by the Ravens, Harrison re-signed with the Steelers in 2004. Harrison's performance in a game against the Cleveland Brown, contributed to the Steelers' victory. From the 2007 season, Harrison was recognised as one of the valuable players. Among many of his recognition, Harrison received the AFC Defence Player of the Month award in 2007 and 2009. He was also named the AP NFL Defensive player of the Year award in 2008, making him the first undrafted player to win the award. More recently, he was ranked no. 29 on NFL's top 100 players list of 2012. 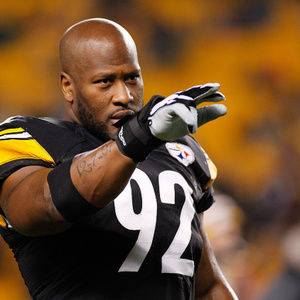