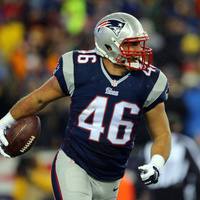 James Develin net worth and salary: James Develin is an American professional football player who has a net worth of $2 million. James Develin was born in Boyertown, Pennsylvania in July 1988. Develin is a fullback who played his college football at Brown University. Develin started his professional career playing for the Oklahoma City Yard Dawgz of the Arena Football League and the Florida Tuskers of the United Football League in 2010. From 2010 to 2012 he was a member of the practice squad for the Cincinnati Bengals of the National Football League. Develin signed with the New England Patriots in 2012. He scored his first receiving touchdown in the 2014 AFC Championship Game and won the 2014 AFC Championship with New England.