Jameis Winston net worth, salary and career earnings: Jameis Winston is an American professional football player who has a net worth of $12 million. Jameis Winston was born in Bessemer, Alabama in January 1994. He is a quarterback who was Gatorade Player of the Year in Alabama at Hueytown High School. Winston played his college football at Florida State where he won the Heisman Trophy, BCS national championship, Walter Camp Award, Manning Award, Davey O'Brien Award, AP College Player of the Year award, Sporting News College Player of the Year award, and was a consensus All-American in 2013. He was drafted #1 overall by the Tampa Bay Buccaneers in the 2015 NFL Draft. In his first year he was selected to the Pro Bowl and named Pepsi NFL Rookie of the Year and selected to the PFWA All-Rookie Team. He also played baseball at Florida State. He signed a four-year deal with Tampa Bay in 2015 for $23.35 million with a $16.7 million signing bonus. 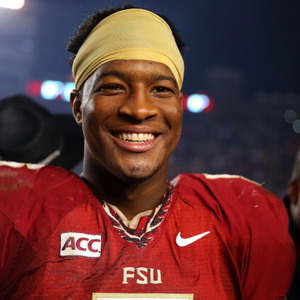