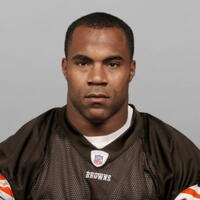 Jamal Lewis Net Worth: Jamal Lewis is a former American football player who has a net worth of -1 Million. Born Jamal Lafitte Lewis on August 26, 1979, in Atlanta, Georgia he served as running back in the National Football League (NFL). Before making a name for himself as an exceptional NFL player, Lewis had the chance to put his skills on display playing college football at the University of Tennessee. In his three year tenure there, he rushed for 2,677 yards and accounted for 3,161 all-purpose. Thus, Lewis ranks third on the university's list of all-time rushers and fourth in all-purpose yards. It was in 2000 that he was selected first overall in the NFL Draft that year. Lewis had since spent his first seven seasons with the Ravens, and then signed a free agent contract with the Cleveland Browns prior to the 2007 season. As a rookie Raven, he helped the team win Super Bowl XXXV. Most famous for his career with the Ravens, Lewis made outstanding performance in the 2003 season, where he rushed for 2,066 yards, which is third-most of all-time, behind Eric Dickerson and Adrian Peterson. The same year, he also rushed for 295 yards in one game. It was a record at the time until Adrian Peterson rushed for 296 yards in 2007. An exceptional NFL player as he was, he retired from the sport after the 2009 season. Jamal Lewis got inducted into the Ravens' Ring of Honor on September 27, 2012.