Jamaal Charles net worth: Jamaal Charles is an American professional football player who has a net worth of $13 million. Jamaal Charles was born in Port Arthur, Texas in December 1986. He is a running back who played for Port Arthur Memorial High School. Charles played his college football at the University of Texas where he won a BCS National Championship and was named a Freshman All-American and Big 12 Offensive Freshman of the Year in 2005.

Charles was named First-team All-Big 12 in 2007 and second-team All-Big 12 in 2005. He was named the Texas Longhorns Most Valuable Player in 2007 and was a three time Clyde Littlefield Outstanding Offensive Back Award winner. Charles was drafted #73 by the Kansas City Chiefs in the 2008 NFL Draft and has played his entire NFL career for the Chiefs. He is already the Kansas City Chiefs rushing yards career leader and is a four time Derrick Thomas Award recipient. Charles was named to the Pro Bowl in 2010, 2012, 2013, and 2014. He is a two-time First-team All-Pro and one time Second-team All-Pro. Charles was the AFC rushing leader in 2013 and is the NFL career leader in average yards per carry at 5.5. In 2010 he signed a five year deal with the Chiefs for $32.5 million and in 2014 he signed a two year extension for $18.1 million. 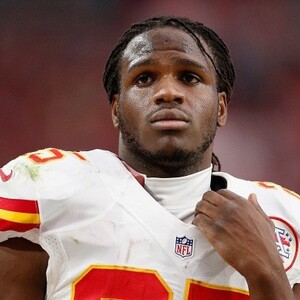