Jalen Ramsey net worth and salary: Jalen Ramsey is an American professional football player who has a net worth of $50 million. On September 9, 2020 Jalen signed a five-year extension with the LA Rams that is worth $105 million over five years. More on this contract later in this article.

Jalen Ramsey was born in Smyrna, Tennessee in October 1994. He is a cornerback who played for Brentwood Academy. Ramsey played his college football at Florida State where he won the BCS national championship in 2013 and was a two time ACC champion. He was a consensus All-American in 2015 and a second-team All-American in 2014 as well as a two time first-team All-ACC selection. Jalen Ramsey was drafted #5 overall by the Jacksonville Jaguars. He was named to the PFWA All-Rookie Team in 2016 and was a first-team All-Pro in 2017. Ramsey was a Pro Bowl selection in 2017 and 2018. He moved over to the LA Rams ahead of the 2019 season.

Contracts: In 2016 he signed a four year deal for $23.35 million with $22.9 million guaranteed as well as a $15.18 million signing bonus. On September 9, 2020, Jalen signed a five-year extension with the LA Rams worth $105 million. The deal came with an astonishing $71.25 million guaranteed at signing (no strings attached). It's the largest contract ever signed by a corner back and makes Jalen the highest paid defensive back in NFL history by a wide margin. He'll earn $21 million per year in average salary.

Real Estate: In November 2020, Jalen paid $9.5 million for a home in Hidden Hills, California. The home was constructed new by Howie Mandel, who never actually occupied the mansion. 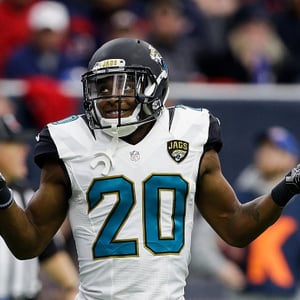