Jake Delhomme net worth: Jake Delhomme is an American retired professional football player who has a net worth of $20 million dollars. Jake Delhomme was born in Breaux Bridge, Louisiana in January 1975. He made the all-state team in high school as a defensive back. He played at the University of Louisiana at Lafayette. As a freshman he had the second ranked passer efficiency ratings. The team won the Big West Conference twice with Jake as their quarterback. He finished as the University's all-time passing leader in both yards and touchdowns. In 2006 he was inducted into the school's Athletic Hall of Fame. He was not selected in the 1997 NFL Draft, but was signed as a free agent by the New Orleans Saints. He played on the practice squad and spent two years in the NFL Europe league. His first NFL games were played in 1999. He started at quarterback for the Carolina panthers from 2003 to 2009. He led the team to the Super Bowl in his first season in Carolina. Jake went on to play for the Cleveland Browns in 2010 and Houston Texans in 2011. He is the Carolina Panthers all-time leader in passing attempts, completions, and interceptions. His 85 yard touchdown pass in the Super Bowl set a record for longest pass in Super Bowl history. He has become a spokesman for the fast food restaurant Bojangles'. Jake married Keri Melancon in 2000 and has two daughters. 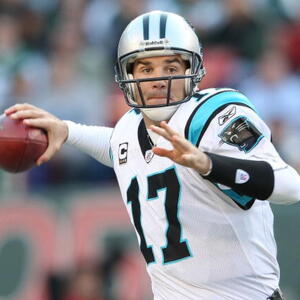