Jahri Evans Net Worth and salary: Jahri Evans is an American professional offensive player who has a net worth of $28 million dollars. Born August 22, 1983 in Philadelphia, Pennsylvania, he currently plays for the New Orleans Saints of the NFL. His first experience with playing football didn't come until high school, in Pennsylvania, where he also went on to play college football for Bloomsburg University of Pennsylvania and graduated with a bachelor's degree in exercise science. In 2009, he established a full scholarship fund with his alma mater for out-of-state minority students enrolled in BU's Master of Science in clinical athletic training program. Evans signed a three-year contract with the New Orleans Saints in 2006 and emerged as a consistent player during training camp and preseason. During his second year with the Saints, he started all 16 games at the position of right guard. In 2009, Evans established himself as one of the NFL's top right guards and he was named to the 2010 Pro Bowl NFC roster, making him only the fourth guard to make the Pro Bowl in the Saints' 43-year franchise history. After the 2009 season Evans was considered a restricted free agent and the Saints re-signed him to a seven-year, $56.7 million contract which reportedly made Evans the highest-paid interior offensive lineman in NFL history at the time. 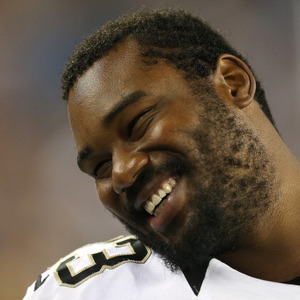