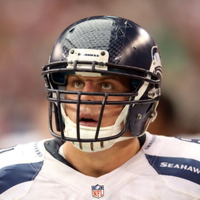 J. R. Sweezy net worth: Justin Ross "J.R." Sweezy is an American football player who has a net worth of $11 million. J.R. Sweezy was born on April 8, 1989 and grew up in Mooresville, North Carolina. After playing linebacker at Mooresville High School, Sweezy enrolled at North Carolina State, redshirting during his freshman year in 2007. In 2008, Sweezy played two games at defensive end. During his redshirt sophomore season, he played in all 12 games, making one start. He was an All-ACC honorable mention during the 2010 season, and in 2011 he was a preseason All-ACC choice and voted team captain. For his collegiate career, Sweezy appeared in 35 games, starting 20 of them, and recorded 86 tackles, 22 tackles for loss, 11 sacks, two forced fumbles and two fumble recoveries. He was taken by the Seattle Seahawks with the 225th pick (seventh round) of the 2012 NFL Draft. With Seattle, Sweezy moved over to the right guard position. During his rookie season, Sweezy appeared in 13 games, starting three of them. In 2013, he started all 15 games he appeared in, and was a member of the line that led Seattle to the NFC Championship.

J.R played for the Seahawks from 2012 to 2015. He spent one season with the Tampa Bay Buccaneers the none season back with the Seahawks. He signed a two-year $9 million deal with the Arizona Cardinals ahead of the 2019 season.