JJ Watt Net Worth and Salary: JJ Watt is an American professional football player who has a net worth of $50 million. Watt is known as the "sack master," and he plays as a defensive end for the Houston Texans. After a strong high school and college career, JJ was drafted by the Texans in 2011. Over the course of his career, Watt has won the AP NFL Defensive Player of the Year Award numerous times.

In 2014, he became the first NFL player in history to rack up more than 20 sacks in two different seasons. Initially, fans of the Texans were unsure what to make of Watt, although he eventually won them over and cemented his reputation as one of the greatest defensive ends in NFL history. In 2017, he was named Sportsperson of the Year by "Sports Illustrated" magazine.

Early Life: Justin James Watt was born on March 22nd of 1989 in Pewaukee, Wisconsin. Raised alongside two younger brothers who also became NFL players, Watt fell in love with both ice hockey and football during his youth. At the age of 13, he abandoned hockey and focused completely on football, citing both the financial and time commitments necessary to play both sports simultaneously.

During his high school years, JJ played football, basketball, baseball, and track & field. He became passionate about football during this period and led his team to considerable achievements. Watt was also named the team's MVP and was selected as an All-state first-team player in his senior year. Despite his achievements, JJ was not heavily recruited by universities.

JJ eventually received a scholarship to play for Central Michigan University, where he played as a tight end. His time at CMU proved to be short, as he moved to the University of Wisconsin after one year to play as a defensive end. It was during this period that Warr started sacking QBs like no tomorrow. During the 2010 season, JJ led the team in tackles for loss, quarterback hurries, blocked kicks, and forced fumbles. During that season, he accumulated 42 solo tackles, 20 assisted tackles, 21 tackles for loss, and seven sacks.

Career: In 2011, Watt skipped his senior year of college and made himself eligible for the NFL Draft. Starting his career with the Texans, JJ immediately became a starter and a key player for the team. He finished his rookie year with more than 5 sacks, and he helped Houston qualify for the first time in their history. After a strong run of performances in the playoffs, he was named the Texans' Rookie of the Year.

While JJ certainly showed his potential in his rookie season, he truly made a name for himself in 2012. During this season, he racked up over 20 sacks in what has been called one of the best seasons for any defensive end in NFL history. In 2013, he was named to the NFL Pro-Bowl Team and earned a number of additional honors, including the NFL Player of the Year award. During the 2013, season, Watt continued to play well despite the Texans having a disappointing season generally.

After signing a new contract in 2014 with the Texans, he started strong by scoring a touchdown from scrimmage – becoming the first Texans player to do in history. He scored another touchdown later that season when he forced Colts quarterback Andrew Luck to fumble the ball before recovering it and running for 45 yards. At the season's end, JJ won the Defensive Player of the Year Award. 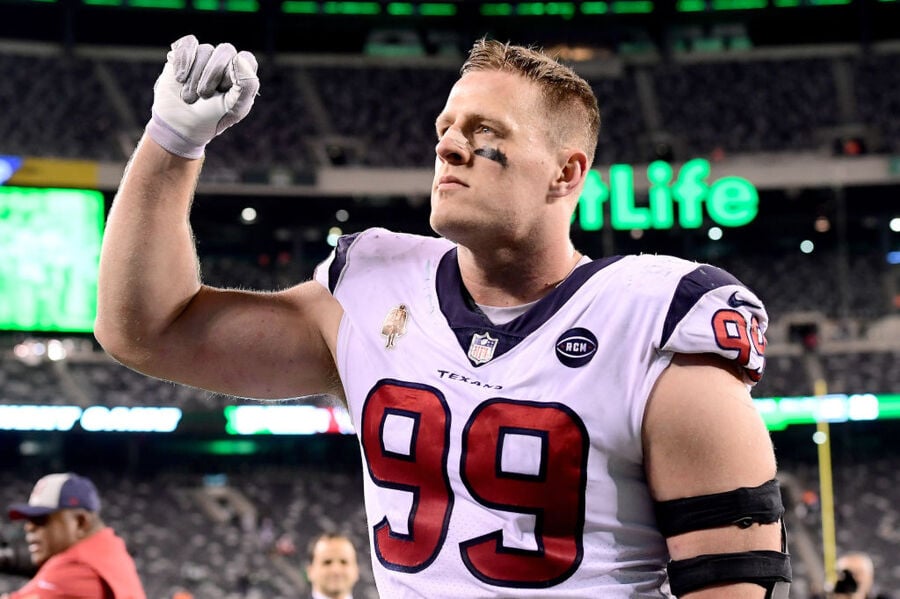 Watt struggled with injuries throughout 2015, but he still started numerous games and played well. In 2016, he underwent surgery on his groin for a sports hernia. Later in 2016, he underwent surgery for a herniated disc. After a string of games in 2016, he received surgery once again on his back and was subsequently ruled out for the rest of the season. By 2017, he had returned to the team – but he was then forced to walk off the field due to a fractured leg. Once again, Watt was ruled out for the rest of the season after receiving surgery on his leg.

In 2018, Watt returned to the starting lineup once again, racking up 16 sacks that season and returning to his earlier level of high performance. However, injury woes struck again in 2019 when he suffered a season-ending torn pectoral just 8 weeks into the season. In 2020, JJ returned to the team again and continued where he left off, scoring his first touchdown since 2014.

Relationships: In 2016, Watt started dating professional soccer player Kealia Ohai. In 2019, the pair became engaged. In 2020, Ohai and Watt married in the Bahamas.

Contracts: In 2014, J.J. signed a six-year $100 million contract with the Houston Texans. The contract came with a $10-million signing bonus and was roughly 50% guaranteed. This made him the NFL's highest-paid non-quarterback. After being selected as the first defensive end in the first round by the Houston Texans, JJ signed a 4-year contract worth about $11 million.

Brand Endorsements: Off the field, he earns millions more from endorsements with companies like Reebok, Gatorade, Ford, Verizon, and more. These endorsements can easily earn J.J. $7-$10 million per year.

Real Estate: In 2015, it was reported that JJ had purchased a home in the southeastern Wisconsin area of Summit. The log cabin spans 4,500 square feet, and it sits on a 35-acre plot of land in Waukesha County. Watt apparently paid $800,000 for the home, which features four bedrooms.

In 2016, JJ put his home in Texas up for sale with an asking price of $465,000. Located in Pearland, the "modest" residence features 4169 square feet of living space, four bedrooms, and a saltwater pool. The home sits on about a quarter-acre of land. Watt originally purchased the property back in 2011 for about $399,000. 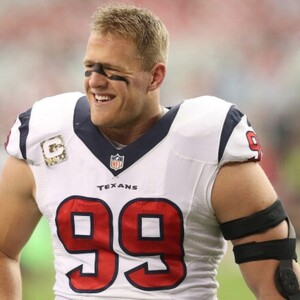