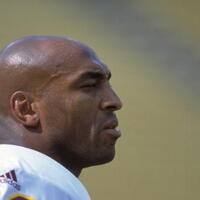 Irving Fryar net worth: Irving Fryar is an American former professional football player who has a net worth of $250 thousand. Irving Fryar was born in Mount Holly Township, New Jersey in September 1962. He was a wide receiver who played at Rancocas Valley Regional High School. Fryar played his college football at Nebraska where he was a consensus All-American in 1983. He was drafted #1 overall in the 1984 NFL Draft by the New England Patriots. Irving Fryar played for the Patriots from 1984 to 1992. He played for the Miami Dolphins from 1993 to 1995 and the Philadelphia Eagles from 1996 to 1998. Fryar played for the Washington Redskins from 1999 to 2000. He was a five time Pro-Bowl selection and a two time second-team All-Pro. Fryar won the Bart Starr Man of the Year Award in 1998. He was selected to the New England Patriots All-1980s Team and the New England Patriots 50th Anniversary Team. In August 2015, Irving Fryar was sentenced to serve five years in prison as a result of a mortgage scam that was perpetrated by Irving and his mother.