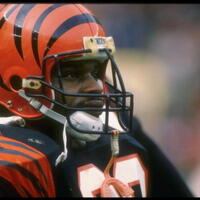 Ickey Woods net worth: Ickey Woods is an American retired professional football player who has a net worth of $400 thousand dollars. Ickey Woods was born in Fresno, California in February 1966. Woods played at Fresno Edison High School and the University of Nevada, Las Vegas. He was drafted in the second round by the Cincinnati Bengals in the 1988 NFL Draft. Woods played running back and fullback for the Bengals his entire career from 1988 to 1991. In his first season Ickey was an All-Pro selection and won an AFC Championship with the Bengals. That same year he was the AFC Rushing Touchdowns Leader and finished second in the NFL in touchdowns with 15. Woods was well known for his "Ickey Shuffle" touchdown end zone dances. In the 1989 season he tore his left anterior cruciate ligament in the second game and missed over a year. He injured his knee in the preseason in 1991 and did not play much after that. He was named the #7 NFL Top Ten One-Shot Wonders. He runs the Ickey Woods Youth Foundation and coaches the Cincinnati Sizzle in the Women's Football Alliance. He has also starred in a GEICO commercial doing the Ickey Shuffle.