What is Herschel Walker's Net Worth?

Herschel Walker is a former professional football player and mixed martial artist who has a net worth of $10 million. During his NFL career Herschel played for the Dallas Cowboys, Minnesota Vikings, Philadelphia Eagles and New York Giants. He actually started his career playing for the New Jersey Generals from 1983 – 1985, which was part of the now-defunct USFL.

In April 2022 Herschel released a personal financial report as a candidate for US Senate in Georgia. According to the report, Herschel claimed at that time to have a net worth ranging between $29 million and $65 million. The report also claimed Herschel earned $4 million in personal income in the year between December 2020 and December 2021.

By far the largest asset in his financial report is a business called "H. Walker Enterprises LLC," which Herschel's report valued at between $25 and $50 million and reportedly produced $3 million in income from 2020 to 2021.

Strangely, at the same time he claimed the business generated $3.195 million in a year and was worth $25 – $50 million, his financial form did not list a single entity that paid him the minimum of $5,000 for services rendered, as would be required on the form.

Let's pretend for a moment that the $25 – $50 million valuation placed on his business is an extreme exaggeration. If you remove those estimates from his net worth range of $29 – $60 million, you could assume that a more accurate net worth estimate for Herschel Walker would be $5 million on the low end and $10 million on the high end.

Herschel Walker was born on March 3, 1962, in Augusta, Georgia. His parents, Willis and Christina Walker, had a total of seven children, and they raised their family in Wrightsville, Georgia. Walker was a student at Johnson County High School, where he was a student athlete and played football and basketball, and also competed in track. During his senior year on the football team, Walker rushed for a total of 3,167 yards, an effort which helped his team, the Trojans, win their first-ever state championship.

Following his graduation from high school, Walker attended the University of Georgia, where he was a running back on the football team. At the University of Georgia, he was a stellar player, and was not only a three-time All-American, but also won the Heisman Trophy in 1982, as well as the Maxwell Award. Although Walker only played for three years, during all three of his collegiate seasons he finished in the top three in Heisman voting, making him the only player in NCAA history to achieve this accomplishment. Additionally, he was the first NCAA player who only played for three years to finished in the top 10 in rushing yards. Walker was elected to the College Football Hall of Fame, and is widely considered by many to one of the great players of college football.

Herschel did not end up graduating from the University of Georgia, Walker. He had been studying to earn a Bachelor of Science degree in Criminal Justice Studies but left to join the USFL.

The three-time All American's professional football career began with the USFL's New Jersey Generals. He won the USFL's rushing title in 1983 and 1985. In 1985 the Dallas Cowboys drafted Herschel in the fifth round (114th overall) in anticipation of the USFL collapsing. The USFL did indeed collapse and Herschel joined the Cowboys for the 1986 season.

After his first two seasons with the Cowboys included some tension between Walker and teammate Tony Dorsett, who was dissatisfied with the cut in his playing time that happened after Walker joined the team, eventually after Dorsett left for the Denver Broncos, Walker was able to really shine. In 1988, Walker clocked in some impressive statistics; while playing seven different positions (including halfback, fullback, tight end, H-back, and wide receiver), he hit 1,512 rushing yards and 505 receiving yards. This made him the 10th player in the history of the NFL to accumulate more than 2,000 combined rushing and receiving yards in a single season. 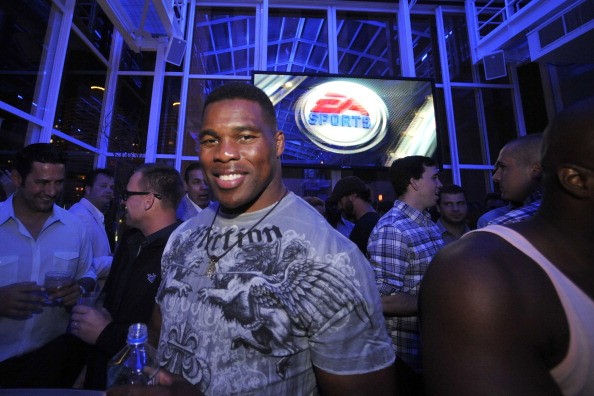 In 1989, the Cowboys traded Walker to the Minnesota Vikings. In return for Walker, the Cowboys received five players (Jesse Solomon, Issiac Holt, Darrin Nelson, David Howard, and Alex Stewart), in addition to six future draft picks. Many regarded this trade, also known as the "HWT" (Herschel Walker trade), as an opportunity for the Vikings to secure a Super Bowl run. However, as time went on, it became clear that the true winners of the trade were the Cowboys, and now the HWT is considered one of the most lopsided trades to occur in the NFL. In 1992, Walker joined the Philadelphia Eagles. He spent three seasons there before moving to the New York Giants in 1995. The Giants reportedly offered him a $4.8 million three-year contract. He then moved on to the Dallas Cowboys, rejoining the team in 1996. He retired after the 1997 season, ending his NFL career with the same team that he started with.

In 1983 Herschel signed what was then considered an unprecedented three-year $5 million contract with the New Jersey Generals. At the time the team was owned by a Dallas oil tycoon named J. Walter Duncan. Like the NFL, the USFL had a $1.8 million salary cap. To circumvent the cap, Herschel's deal was structured where part of the money was a separate "personal services" contracted signed with the team owner. That contract was transferred to Donald Trump when he became the team owner after the 1983 season.

When Herschel signed with the New York Giants in 1995, he received a three-year $4.8 million contract.

In 1992, while he was still an active NFL player, Walker was a competitor in the 1992 Winter Olympics that took place in Albertville, France. He was a member of the USA men's bobsleigh team. He and his teammate, Brian Shimer, competed in the two-man bobsleigh competition, finishing seventh overall.

In 2009, Walker signed with Strikeforce, an MMA promotion company, as a competitor in the heavyweight division. After training at the American Kickboxing Academy for twelve weeks, Walker made his MMA debut in January 2010, against Greg Nagy. Walker won the fight. His second MMA fight took place in January 2011, during which Walker defeated WEC fighter Scott Carson. In addition to his MMA training, Walker is also a practice of taw kwon do; he has a fifth-degree black belt.

In 1999 Herschel launched a chicken distribution company called Renaissance Man Food Services. He built his own chicken processing plant and by 2008 the company reportedly employed over 100 people and was allegedly generating $70 million in gross revenue. In a later court case Herschel revealed that between 2008 and 2017 the company generated around $1.5 million in average annual profits.

When the company applied for help from the Payment Protection Program following the COVID-19 crisis, Herschel reported that the company's revenue had fallen by more than 50%. His PPP application showed that the company employed eight people. Renaissance ultimately received a total of $182,000 in PPP support across two loans, roughly half of which was forgiven.

Outside of sports, Walker has also occasionally appeared on television in various reality series. He was a cast member on the third season of the show "Rachael vs. Guy: Celebrity Cook-Off"—he actually was the winner that season. The other show he has appeared on is "Celebrity Apprentice" (2009). He was eliminated from the show during the eighth episode.

In 1983, Walker married Cindy DeAngelis Grossman. The couple were college sweethearts, and have one son together. They divorced in 2002, after 19 years of marriage. He began dating Julie M. Blanchard sometime around the year 2010 (2010 is when they were first romantically linked). They are engaged, and reside in Westlake, Texas. Blanchard is a former ESPN executive.

Walker is a longtime Republican, and is known for being politically active. He was in a 2014 commercial that was paid for by the United State Chamber of Commerce that supported Jack Kingston's campaign for the U.S. Senate election. Other candidates he has publicly expressed his support for include U.S. Senator Kelly Loeffler, Secretary of State Brian Kemp, and President Donald Trump. In 2019, Walked was appointed as the Co-Chair of President Trump's Council on Sports, Fitness, and Nutrition. 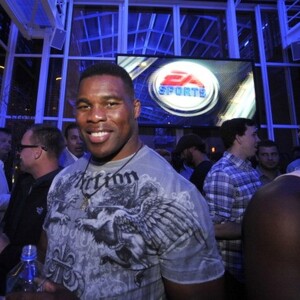