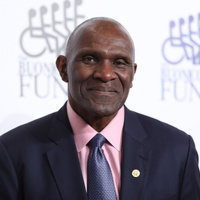 Harry Carson Net Worth: Harry Carson is a retired American football player who has a net worth of $10 million. A former American football inside linebacker, he had spent his entire pro career playing for the NFL's New York Giants. Born Harold Donald Carson on November 26, 1953 in Florence, South Carolina, he first played football for Wilson High School and then for McClenaghan High School, from which he graduated. He continued to hone his football skills at the South Carolina State University, where he didn't miss a single game in four years. For his achievements in college football, Carson was inducted in the College Football Hall of Fame in 2002. It was in the fourth round of the 1976 NFL draft that he got drafted by the New York Giants. Ever since, he has remained with the team, 13 seasons in total, and 10 out of which he was their captain. Carson´s numbers include 11 passes, returning them for a total of 212 yards, as well as 14 fumbles, returning them for 36 yards, and one touchdown. In 1986, he helped the New York Giants win the Super Bowl XXI, the first for the Giants. He retired in 1988 after 13 pro seasons with the team. In 2006, Carson was elected to the Pro Football Hall of Fame, despite of his outspoken criticism of this honor. To this day, Carson is still involved with the Giants. He works in sports broadcasting and has his own sport consulting and promotions company, Harry Carson Inc. Since he retired, Carson has suffered physical consequences of his time as a professional football player.