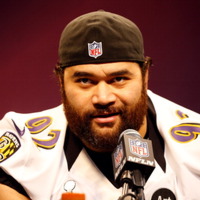 Haloti Ngata net worth: Haloti Ngata is an American professional football player at the nose tackle position for the NFL's Baltimore Ravens who has a net worth of $10 million. Haloti Ngata was born in Inglewood, California in 1984 and attended high school at Salt Lake City's Highland High School where he was a three-year defensive line starter. Haloti Ngata was a five-star recruit and overall number 2 prospect in the nation out of high school who played in the 2002 U.S. Army All-American Bowl. He was recruited by Oregon, BYU, Nebraska, Texas A&M, and Washinghton. Despite being a devout Mormon, Haloti Ngata chose the University of Oregon over BYU for college. During the 2004 and 2005 seasons, Haloti Ngata became one of the best players in college football. Haloti Ngata was the 2005 Pac-10 Defensive Player of the Year and a consensus first-team All-American. The Baltimore Ravens selected Haloti Ngata with the 12th overall pick in the first round of the 2006 NFL Draft. Since he has been in the NFL, Haloti Ngata has been selected to the Pro Bowl four times (2009, 2010, 2011, 2012), was a part of the Super Bowl XLVII champions team, was a part of the 2012 AFC Champion team, has been All-Pro five times (2008, 2009, 2010, 2011, 2012), and is ranked 9th on the 2012 NFL Top 100 Ranking.