Golden Tate net worth: Golden Tate is an American wide receiver who has a net worth of $9.4 Million. Golden Tate was born on August 2, 1988 in Hendersonville, Tennessee. He was drafted by the Seattle Seahawks with the 60th pick (second round) of the 2010 NFL Draft. Golden Tate attended Notre Dame after being drafted out of high school for baseball by the Arizona Diamondbacks.

He played baseball for two years in college, but mostly focused on football. His freshman year he recorded six catches for 131 yards and one touchdown, and returned 15 kicks on the year. In his sophomore season, Tate started all 13 games and finished with 58 catches, 1,080 yards and 10 touchdowns. In the Hawaii Bowl that year, he led the Irish to a victory over the Hawaii Warriors with six catches, 177 yards and three touchdowns. In the 2009 season, Golden Tate won the Biletnikoff Award and was named as a unanimous first-team All-American. Forgoing his senior season, Tate signed with the Seahawks after they drafted him, and started in 11 games as a rookie, finishing with 21 catches and 227 yards. In 2011, he notched 35 catches for 382 yards and three scores; in 2012, he finished with 45 catches for 688 yards and seven touchdowns, most notably the "Fail Mary" catch that ended the NFL referee lockout. In 2013, Tate caught 64 balls for 898 yards and five touchdowns. 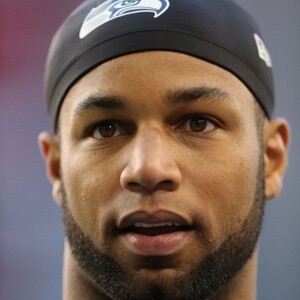