Geno Smith net worth: Geno Smith is an American football player who has a net worth of $2 million. Geno Smith is best known for being a quarterback for the New York Jets; he was selected by the Jets in the second round of the 2013 NFL Draft. He was born on October 10, 1990 in Miami Florida.

His great-uncle, Danny Smith, was a record breaking All-American hurdler at Florida State and his cousin Melvin Bratton was a star running back at the University of Miami in the mid-1980's. Smith attended West Virginia University, majored in English, and played for the West Virginia Mountaineers football team from 2009-2012. He received an invitation to the Scouting Combine where his performance was well received by scouts, but they noted his ball placement needed to be improved. Smith was widely regarded as one of the top prospects alongside EJ Manuel of Florida State University. In the days leading up to the draft, several NFL teams expressed interest in Smith, including the Kansas City Chiefs, Jacksonville Jaguars, Oakland Raiders, Philadelphia Eagles, Buffalo Bills, and New York Jets. Smith made his professional debut in the preseason on August 9, 2013 against the Detroit Lions. He completed 6 of 7 passes for 47 yards but left the game due to an ankle injury in the second quarter. His X-rays showed no structural damage and Smith returned to practice on August 11, 2013. Smith was named the team's starting quarterback on September 4, 2013. 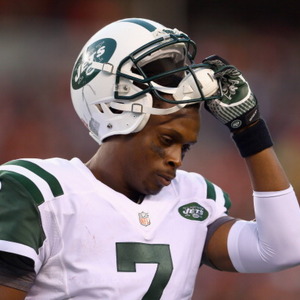