Gary Anderson net worth: Gary Anderson is a South African former professional football player who has a net worth of $8 million. Gary Anderson was born in Parys, Orange Free State, South Africa in July 1959. He was a placekicker who played at Syracuse. Anderson was drafted #171 by the Buffalo Bills in 1982 NFL Draft. He did not play for the Bills but played for the Pittsburgh Steelers from 1982 to 1994. Gary Anderson played for the Philadelphia Eagles from 1995 to 1996, the San Francisco 49ers in 1997, the Minnesota Vikings from 1998 to 2002, and the Tennessee Titans from 2003 to 2004. During his career he was selected to the Pro Bowl four times and was a two time First-team All-Pro. Anderson won the Golden Toe Award in 1998. He was named to the NFL 1980s All-Decade Team and the NFL 1990s All-Decade Team as well as the Pittsburgh Steelers All-Time Team.

Highest Paid Kicker: In 1998, Gary signed a six-year $2.4 million contract with the Pittsburgh Steelers that made him the highest paid kicker of all time up to that point with annual earnings topping $400,000. His previous contract paid $305,000 which was topped by the $325,000 Morton Andersen made at the New Orleans Saints. 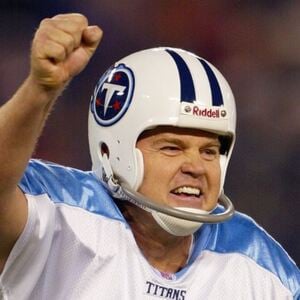