Ezekiel Elliott net worth: Ezekiel Elliott is an American professional football player who has a net worth of $25 million. Ezekiel Elliott was born in Alton, Illinois in July 1995. He is a running back who was a three sport star at John Burroughs School. Elliott played his college football at Ohio State where he won the National Championship in 2014 and the Fiesta Bowl championship in 2015. Elliott was named unanimous All-Big Ten in 2015 and was the Big Ten Offensive Player of the Year and the Big Ten Running Back of the Year. During his college career he was also named a second-team All-American and won the Archie Griffin Award and James E. Sullivan Award.

Contracts: He was drafted #4 by the Dallas Cowboys in the 2016 NFL Draft and signed a four year rookie contract for $24.9 million with a signing bonus of $16.3 million. In September 2020 Ezekiel signed a 6-year $90 million contract with the Cowboys that came with $50 million guaranteed and a $7 million signing bonus. 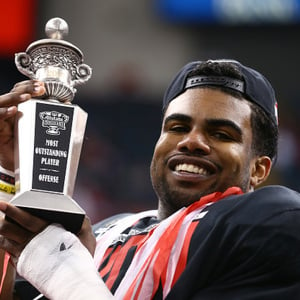