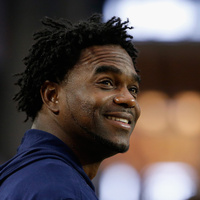 Edgerrin James net worth and salary: Edgerrin James is a former American football player who has a net worth of $40 million. Edgerrin James is probably most famous for being a running back for the Indianapolis Colts, Arizona Cardinals and Seattle Seahawks, before retiring in 2011. James was on the football team at his high school in Florida. He was acquired by University of Miami and earned his place in the university history as one the best running back. James' professional career began when The Indianapolis Colts selected him for the 1999 Draft, which led to a very lucrative rookie contract of $49 million. He proved his worth as he was named the 1999 NFL Offensive Rookie of the Year by Associated Press and won the NFL rushing title in his first two seasons. In 2006, James left the Colts, signing a four-year deal (worth $30 million) with Arizona Cardinals. His time with the Cardinals was rocky, which led him to not play for the team in the 2009 NFL playoffs. The tragic death of his long-term girlfriend and mother of his three children, led him to be released from the team. After grieving the loss of his girlfriend, James signed a one- year contract (worth $2 million) with Seattle Seahawks in 2009. Only playing in seven games, the Seahawks released him in just 3 months. James is now a co-owner of one of the largest go-kart track in Arizona.