Earl Thomas net worth and salary: Earl Thomas is an American professional football player who has a net worth of $26 million. He played for the Seattle Seahawks from 2010 to 2018. He was traded to the Baltimore Ravens ahead of the 2019 season.

Earl Thomas was born in Orange, Texas on May 7, 1989. He played football at West Orange-Stark High School in West Orange, Texas. Earl was an all-state selection and three year starter at defensive back, running back, and wide receiver. During his high school career he had 112 career tackles, 11 interceptions, two kickoff return touchdowns, two punt return touchdowns, 1,850 rushing yards, and 2,140 receiving yards.

Earl Thomas played college football for the University of Texas Longhorns where he played under coach Mack Brown from 2007 to 2009. In 2008, as a redshirt freshman Earl started all 13 games at strong safety and set a Longhorn freshman record with 63 tackles and 17 pass breakups. In 2009, Earl intercepted eight passes, taking two of them into the end zone for touchdowns. He decided to forego his last two years of eligibility and declared for the 2010 NFL Draft. Earl was chosen with the 14th overall pick in the first round of the 2010 NFL Draft by the Seattle Seahawks. He was 20 years old, making him one of the youngest players to be eligible for the draft. He played for the Seahawks until 2019, winning Super Bowl XLVIII.

In 2019 Thomas signed a four-year $55 million contract with the Baltimore Ravens that came with $32 million guaranteed money.

Personal Life: In April 2020 Earl was allegedly held at gunpoint by his wife Nina. Nina had reportedly discovered Earl in bed with another woman AND his brother Seth Thomas. Nina was subsequently arrested. Earl and Nina married in April 2016. 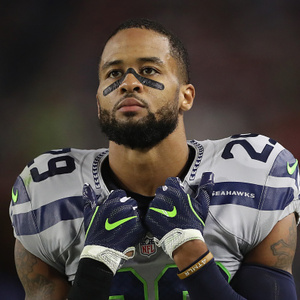