Earl Campbell Net Worth: Earl Campbell is a former American professional football player who has a net worth of $25 million dollars. A running back for the Houston Oilers from 1978-1984, and then for the New Orleans Saints from 1984-1985, Earl Campbell was a five-time Pro Bowl selection, and received multiple MVP and Player of the Year awards during his short professional career. Born in Tyler, Texas on March 29, 1955, Campbell is best known for his position as running back in the National Football League. He received a Heisman Trophy and is a member of the Pro Football Hall of Fame and the College Football Hall of Fame. He attended John Tyler High School as well as the University of Texas at Austin and was drafted in to NFL as a first overall pick in 1978. He made his professional debut in 1978 with the Houston Oilers with whom he played between 1978 and 1984. Following the Oilers, he played for the New Orleans Saints between 1984 and 1985 when he made his last NFL appearance. His career statistics include a total of 9,407 rushing yards, a total of 74 touchdowns, and a rushing average of 4.3. He was a two-time All-American in college and was a five-time Pro Bowl selection in the NFL. He was Offensive Player of the Year in the NFL in 1980 and is a three-time NFL Rushing champion. He is known to many for being a "one-man demolition team." He is currently resigned to a wheelchair due to permanent injury and damage caused from playing in the NFL. He is currently a businessman in Austin, Texas and is President of Earl Campbell Meat Products. 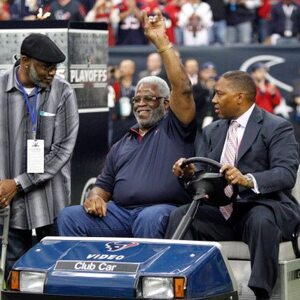