Dwayne Bowe Net Worth and salary: Dwayne Lorenzo Bowe is an American football player who has a net worth of $25 million. He is still unlocking his potential as American football wide receiver for the NFL team Kansas City Chiefs. Born on September 21, 1984 in Miami, Florida, he and his brother were brought up by their paternal grandparents since their parents were not married and their father was not present at all.

Thus, Bowe was a troublemaker at school and it was after he was badly injured in a nightclub fight that he joined the football team in Miami Norland High School. He was a 6′ 2″ boy with excellent athletic skills at the time and it didn't take him much to win an athletic scholarship to the Louisiana State University. Also, he was regarded as one of the best wide receivers in NFL draft during the year 2007. Often compared to Hines Ward, he got selected by the Kansas City Chiefs that year. On August 17, 2012 he signed a US$9.5 million tender for one year. But after he injured his ribs in the 14th week of the season he was placed on injured reserve. He has since been experiencing hardships like a 2013 arrest for marijuana possession and over-speeding. However, Dwayne Bowe is still the first in the Chiefs record books in receiving-yards-per-game (65.1) and second in receptions-per-game (4.7). 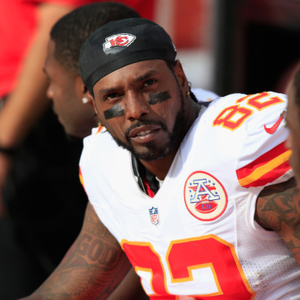