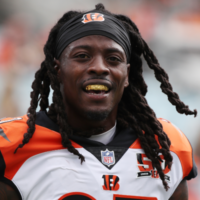 Dre Kirkpatrick net worth: Dre Kirkpatrick is an American professional football player who has a net worth of $20 million. He is most well known for winning two championships at Alabama and playing for the Cincinnati Bengals.

Dre Kirkpatrick was born in Gadsden, Alabama in October 1989. He is a cornerback who was a USA Today High School All-American in 2008 at Gadsden City High School. Kirkpatrick played his college football at Alabama where he won the BCS National Championship in 2010 and 2012 and the SEC Championship in 2009. He was named second-team All-SEC in 2010 and 2011. Dre Kirkpatrick was drafted #17 overall by the Cincinnati Bengals in the 2012 NFL Draft. In 2015 he signed an extension for $7.5 million for one year. Kirkpatrick signed a five year deal with the Bengals for $52.5 million with $12 million guaranteed and a signing bonus of $7 million in 2017.