How much is Donovan McNabb Net worth Worth?

Donovan McNabb net worth and salary: Donovan McNabb a retired American professional football player who has a net worth of $35 million. Donovan McNabb was born on November 25, 1976 in Chicago, Illinois. He is a former quarterback for the Washington Redskins and, most famously, the Philadelphia Eagles. He was a six time Pro-Bowl Selection, and was been chosen as Big East Offensive Player of the Year three times. When people talk about great NFL football quarterbacks, the name of Donovan McNabb must be mentioned. A former second pick overall in the 1999 draft, McNabb was quarterback for the Philadelphia Eagles from 1999 to 2009. He spent the 2010 year with the Redskins and the 2011 year with the Vikings. Over the course of his career, McNabb led the Eagles to 4 straight NFL East Divisional Championships (2001 – 2004) and a fifth championship in 2008. His team made a Super Bowl appearance in 2008 (Super Bowl XXXIX – a loss to New England) and he has established himself as the Eagles' all-time leader in pass attempts, pass completions, and passing TDs. Donovan McNabb threw 234 touchdowns and was intercepted 117 times, a very good ratio. 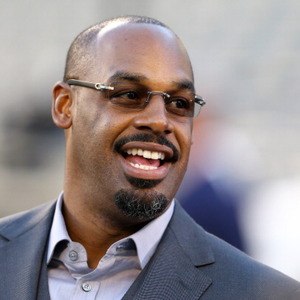