Dion Jordan net worth: Dion Jordan is an American professional football player who has a net worth of $6 million. Dion Jordan was born in San Francisco, California in March 1990. He is a defensive end who played at Chandler High School. Jordan played his college football at Oregon where he was a three time Pac-12 champion and a two time first-team All-Pac-12 selection as well as a first-team All-American in 2012.

He was drafted #3 overall by the Miami Dolphins in the 2013 NFL draft and played for the Dolphins from 2013 to 2016 before joining the Seattle Seahawks in 2017. Jordan was suspended in the 2014 season for four games for violating the league's performance enhancing substance policy. He violated it again later in the season and was suspended two more games. He was then suspended the entire 2015 season for a third violation. He failed a physical in 2017 and was released by Miami. He had knee surgery in 2018. 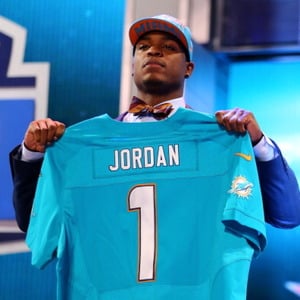