Dez Bryant net worth: Desmond Bryant is an American football wide receiver who has a net worth of $4 million. He is currently a wide receiver for the Dallas Cowboys, and joined the team after being chosen number 24 overall in the first round of the 2010 NFL Draft. Bryant was born on November 4, 1988 in Galveston County, Texas but was raised in Lufkin.

He had a troubled upbringing as he was born to a mother who was only 14 years old when he was born, and she was arrested for dealing crack when he was eight. He played college football for Oklahoma State University and earned All-American honors. Bryant was signed by the Cowboys for a five-year contract worth $12.05 million, with roughly $8.4 million guaranteed. The day after signing, it was announced that he would wear number 88, the same number as Hall of Famer Michael Irvin, and Cowboys legend Drew Pearson. He caught his first NFL touchdown catch on a 31-yard pass from Tony Romo in October 2010. Bryant finished his rookie season with 45 receptions for 561 yards and 6 receiving touchdowns. In 2012, Bryant suffered from several injuries throughout the second half of the season. He injured his finger in early December, but played through the injury, and left the field with a back injury in the fourth quarter of his final game in 2012. He started the season slow in 2013 with just 4 receptions for 22 receiving yards; but finished the season with 93 catches and 13 touchdowns, both career highs. He went on to his first Pro Bowl in 2013. Bryant is not currently married but he has two sons, Zayne and Dez Jr. 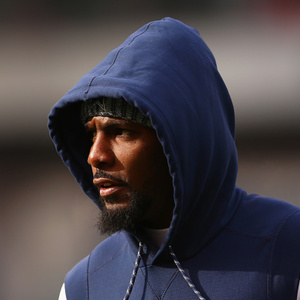