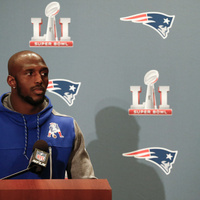 Devin McCourty net worth and salary: Devin McCourty is an American professional football player who has a net worth of $8 million. Devin McCourty was born in Nyack, New York in August 1987. McCourty is a free safety, cornerback, and kickoff returner who played at Saint Joseph Regional High School.  Devin's twin brother Jason McCourty is a cornerback for the Tennessee Titans. Devin played his college football at Rutgers University where he was named First-team All-Big East in 2009. McCourty was drafted #27 by the New England Patriots in the 2010 NFL Draft and has spent his entire career in New England. He made the Pro Bowl in 2010 and is a two time All-Pro. McCourty won AFC Championship with the Patriots in 2011 and 2014. In 2010 he had seven interceptions which tied for second in the NFL and became the second most by a Patriots rookie in team history.