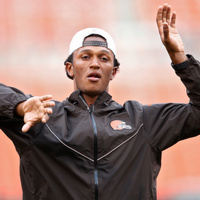 DeShone Kizer net worth: DeShone Kizer is an American professional football player who has a net worth of $2 million. DeShone Kizer was born in Toledo, Ohio in January 1996. He is a quarterback who was named AP Ohio Division III co-offensive player of the year at Central Catholic High School. Kizer played his college football at Notre Dame where he threw for 45 touchdowns and ran for another 17 with 5,589 passing yards and 1,029 rushing yards during his two years. He was drafted #52 overall by the Cleveland Browns in the 2017 NFL Draft. Kizer played for the Browns in 2017 and the Green Bay Packers in 2018. He joined the Oakland Raiders in 2019. In 2017 he signed a four year deal with the Browns for $4.95 million with $2.42 million guaranteed and a signing bonus of $1.73 million. During his first two NFL seasons DeShone Kizer threw 11 touchdowns and 24 interceptions.