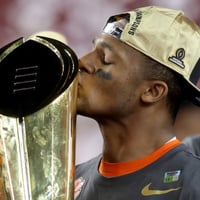 What is Deshaun Watson's net worth and salary?

Deshaun has won the Johnny Unitas Golden Arm Award, Best Male College Athlete ESPY Award, Dave O'Brien Award, and Manning Award, and the Houston Texans selected him in the first round of the 2017 NFL draft.

As of this writing, Watson holds the record for highest career completion percentage in NFL history (67.8%), and he is #2 in all-time career passing. Deshaun sat out the 2021 season due to the fact that multiple sexual misconduct lawsuits were filed against him, and he was traded to the Cleveland Browns in March 2022.

In March 2021, a Houston massage therapist filed a civil lawsuit against Deshaun in which she claimed he touched her with the tip of his erect penis and asked for sex during a treatment a year prior. More than 20 additional civil complaints and lawsuits followed by April 2021. A separate group of around 20 massage therapists also came to his defense. Watson's lawyer claimed the allegations were an attempt at blackmail.

In April 2021, Nike suspended its endorsement with Watson. Apple's Beats by Dre brand terminated its deal with him around the same time. In March 2022, a grand jury decided not to indict Deshaun on "harassment and sexual misconduct" charges, but more than 20 civil suits have been filed against him.

Deshaun Watson was born Derrick Deshaun Watson on September 14, 1995, in Gainesville, Georgia. He is the son of Don Richardson and Deann Watson. Deshaun played football at Gainesville High School, where he was head coach Bruce Miller's first freshman starting quarterback. He set several state records while playing for Gainesville High, such as total touchdowns (218), total yards (17,134), and career passing yards (13,077). During his junior year, the team won a state championship, and Watson was named Junior All-American as well as a 2014 Top 100 Recruit and Player to Watch. After receiving numerous scholarship offers, Deshaun committed to Clemson University in February 2012. In 2014, the "ESPN 300" ranked Watson the #1 quarterback recruit of the year.

In early 2014, Deshaun enrolled at Clemson University in South Carolina, and the Tigers named him their starter in September. In his first college game as a starter, Watson set a Clemson record when he threw six touchdown passes. In October 2014, he broke a bone in his right hand during a game and had to sit out the next few games. In his first game back, he strained his LCL and had to miss most of that game as well as the next game. When Deshaun returned, he helped Clemson defeat their biggest rival, the South Carolina Gamecocks, while playing with a torn ACL in his left knee. Watson later underwent reconstructive knee surgery and had to miss Clemson's bowl game against the Oklahoma Sooners. In 2015, Clemson was undefeated, with a record of 12–0 during the regular season, and the team won the ACC Championship Game. Deshaun was named the ACC Championship Game MVP. The Tigers then made it to the 2016 College Football Playoff, and Watson was named MVP after the team won a semifinal game against the Sooners. During the College Football Playoff National Championship game, Clemson was defeated by the Alabama Crimson Tide, but Deshaun set the record for most total yards in the history of the National Championship game (478).

His performance during the 2015 season resulted in Watson being a finalist for the Heisman Trophy, and he came in third behind Alabama's Derrick Henry and Stanford's Christian McCaffrey. Since Deshaun was the year's top college quarterback, he received the Davey O'Brien Award. In 2015, he was named ACC Offensive Player of the Year and ACC Player of the Year as well. Watson won the Davey O'Brien Award again in 2016, and that year he also received the Manning Award and the Johnny Unitas Golden Arm Award and was a Heisman Trophy candidate. Clemson won the 2017 College Football Playoff National Championship, and Deshaun was named the offensive MVP of the game. In November 2016, he decided to declare for the NFL draft instead of playing his senior year at Clemson. Watson earned his communications degree in just three years.

During the 2017 NFL Draft, Deshaun was the 12th overall pick, and he signed a $13+ million contract with the Houston Texans on May 12, 2017. He made his first NFL start on his 22nd birthday, September 14, 2017, and during his first season, he tied the rookie touchdown record and was named AFC Offensive Player of the Week, AFC Offensive Player of the Month, and NFL Offensive Rookie of the Month. Watson's rookie season ended early after he tore his ACL during practice in November, and he underwent surgery a few days after the injury occurred. Deshaun was ranked #50 on the "NFL Top 100 Players of 2018" list, and he was chosen for the PFWA All-Rookie Team. During the 2018 season, he suffered a partially collapsed lung and broken ribs, and since he was worried about the effect air pressure would have on his chest, he took a 12-hour bus ride to the team's October game against the Jacksonville Jaguars instead of flying with the rest of the Texans. In January 2019, Watson was named to the Pro Bowl, and in 2020, he signed a four-year contract extension worth $177.5 million, the second-most lucrative contract in the history of the NFL.

In December 2020, Deshaun was fined $7,500 after he and some of his teammates violated COVID-19 protocols at the opening of  his restaurant, Lefty's Famous Cheesesteaks. After the 2020 season ended, Watson asked to be traded due to issues with the coaching and front office staff, but the Texans didn't want to negotiate with other teams. However, they changed their minds after numerous sexual misconduct allegations against Watson emerged, and they traded Deshaun to the Cleveland Browns in March 2022. Though he was technically still a member of the Texans in 2021, he did not play in any games that season because of "non-injury reasons/personal matter." Watson signed a five-year contract with the Browns worth $230 million, the largest contract in the league's history as well as the most guaranteed money.

Deshaun is a Christian, and in 2017, he spoke to "The Clemson Insider" about how he decided which college scholarship to accept, saying, "I found Christ when I was in ninth grade, and I just started praying on my decision." He also talked about the day he called Clemson coach Dabo Swinney and told him that he wanted to be the team's quarterback, stating, "I just felt like that day I committed to Clemson, God was talking to me, and I just felt like the time was perfect and that's what I wanted to do." After moving to Houston, Watson became a Southern Baptist. In 2006, Warrick Dunn of the Atlanta Falcons donated a home to the Watson family through his charitable organization Homes for the Holidays (with help from Habitat for Humanity). In 2017, Deshaun donated the first check he received as an NFL player (worth $27,000) to three of NRG Stadium's cafeteria employees. The women were affected by Hurricane Harvey, and as he presented the check, Watson stated:

"For what you all do for us every day and never complain, I really appreciate you all, so I wanted to give my first game check to y'all to help y'all out in some type of way."