Derrick Coleman attended Troy High School in Fullerton, California where he was a three year starter on the varsity football team at running back and linebacker. Coleman broke the school record for most touchdowns in a season (38); most points scored in a season (232); most rushing yards in a season (2,456); most rushing touchdowns (38); most yards offense in a season (2,456); most touchdowns scored in a game (5); longest rushing touchdown (90 yards). Derrick Coleman played college football for the University of California Los Angeles Bruins under Coach Rick Neuheisel where as a senior he played in all 14 games as a running back and on special teams. Derrick Colman was undrafted during the 2012 NFL Draft and signed with the Minnesota Vikings as an undrafted free agent. Derrick Coleman was waived by the Vikings in August 2012 and picked up by the Seattle Seahawks in December 2012. Derrick Coleman scored his first NFL touchdown on December 2, 2013 during the Seahawks' Monday Night Football game against the New Orleans Saints. He joined the Atlanta Falcons in 2017. 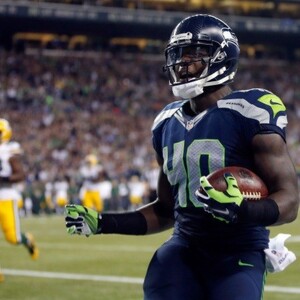