Derrick Brooks Net Worth: Derrick Brooks is an American retired professional football player who has a net worth of $30 million. Derrick Dewan Brooks was born in Pensacola, Florida in April 1973. He played at Washington High School and in his senior season the team made the state playoff semifinals.

He was named to the Florida High School Association All-Century Team in 2007. Brooks played his college ball at Florida State University. He won a National Championship with the Seminoles in 1993. AT FSU he was a 3x First team All-Atlantic Coast Conference, ACC Defensive Player of the Year, two time Vince Lombardi Award finalist, and two time Consensus first-team All-American. Derrick was drafted #28 by the Tampa Bay Buccaneers in the 1995 NFL Draft. During his pro career he was selected to the Pro Bowl 11 times and was a nine time All-Pro. In 2003 Brooks became a Super Bowl Champion with the Bucs at Super Bowl XXXVII. He was named Walter Payton Man of the Year in 200, NFL Alumni Linebacker of the Year and AP Defensive Player of the Year in 2002, and Pro Bowl MVP in 2005. Brooks was named to the NFL 2000s All-Decade Team. His #10 was retired by Florida State and his #55 was retired by Tampa Bay. Derrick only played for the Buccaneers in his career, which lasted from 1995 to 2008. He co-owns and is the president of the Arena Football League the Tampa Bay Storm. In 2014 Brooks was inducted into the Pro Football Hall of Fame. He founded the Brooks Bunch charity and youth scholarship foundation. Derrick is married and has four children. 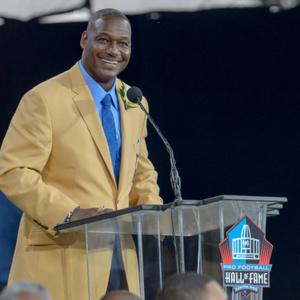