How much is Derek Wolfe Worth?

Derek Wolfe net worth: Derek Wolfe is an American football player playing at the defensive end position for the Denver Broncos who has a net worth of $4 million. Derek Wolfe was born in Lisbon, Ohio in 1990 and grew up in rural Negley, Ohio near the border of Pennsylvania. He played high school football at Beaver Local High School in Lisbon, Ohio and was considered only a two-star recruit by Rivals.com. Derek Wolfe is the only player from his high school to ever be drafted by the NFL. Derek Wolfe played college football at the University of Cincinnati Over his four years of playing for the Bear Cats, Wolfe racked up 162 total tackles, 37 tackles for loss, and 19.5 sacks. In his senior season, Derek Wolfe was named Co-Big East Defensive Player of the Year. Derek Wolfe was selected with the 36th overall pick in the second round of the 2012 NFL Draft by the Denver Broncos. Derek Wolfe made his NFL debut with the Denver Broncos on August 9, 2012 in a preseason game against the Chicago Bears where he had two sacks and three tackles. Derek Wolfe finished his rookie season with 40 tackles, six sacks, and two passes defensed. His six sacks were the third most on the team behind Von Miller and Elvis Dumervil. 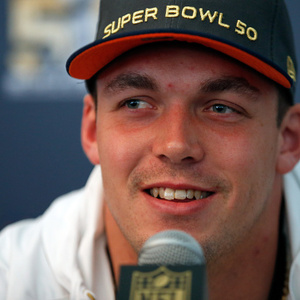