Derek Watt net worth: Derek Watt is an American professional football player who has a net worth of $3 million. He is perhaps best known for being the brother of J.J. Watt and T.J. Watt.

Derek Watt was born in Waukesha, Wisconsin in November 1992. He is a fullback who played at Pewaukee High School where he was a UA Today High School All-American. Watt played his college football for Wisconsin. He was drafted #198 overall by the San Diego/Los Angeles Chargers in the 2016 NFL Draft. Derek Watt played for the Chargers from 2016 to 2019. In 2020 he joined the Pittsburgh Steelers to play with his brother T.J. Watt. Derek Watt signed a three year deal for $9.75 million with the Steelers in 2020. During his first four NFL seasons he had 17 rushing attempts for 45 rushing yards as well as 10 receptions for 152 receiving yards and one touchdown. In 2020 he began hosting the obstacle course competition TV series Ultimate Tag with his brothers J.J. and T.J. Watt. 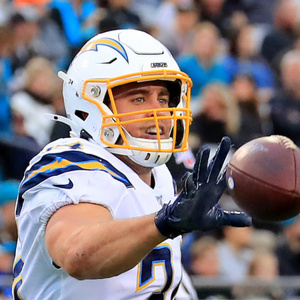