Derek Carr net worth and salary: Derek Carr is an American professional football player who has a net worth of $80 million. Derek Carr was born in Fresno, California in March 1991. He is a quarterback who played at Clements and Bakersfield Christian high schools. Carr played his college football at Fresno State where he was a two time First-team All-MWC selection and two time MWC Offensive Player of the Year. He was drafted #36 overall by the Oakland Raiders in the 2014 NFL Draft. Carr was selected to the Pro Bowl in 2015, 2016, and 2017. His older brother David Carr was also an NFL quarterback who played at Fresno State. During his first four seasons Derek Carr racked up 103 touchdowns and threw for 14,690 yards.

During his rookie season he signed a four year deal for $5.37 million. Derek Carr signed a five year, $125 million contract with the Raiders in 2017.

Between June 2017 and June 2018 Derek Carr earned $42 million between salary and bonuses which made him one of the highest paid athletes in the world.

In April 2022 Derek and the Raiders signed a three year $121 million contract extension. 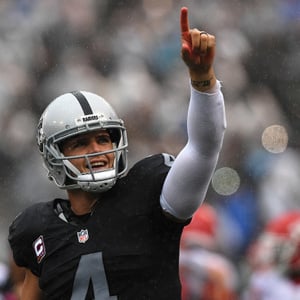