Derek Anderson net worth and salary: Derek Anderson is an American professional football player who has a net worth of $6 million dollars. Derek Matthew Anderson was born in Portland, Oregon in June 1983. In high school he won three straight championships. He was named state player of the year for both football and basketball as a senior.

Anderson played his college ball at Oregon State. He set the Oregon State record for throwing 4,058 yards in 2003. Derek was drafted by the Baltimore Ravens in the sixth round of the 2005 NFL Draft. He was waived by the Ravens and signed by the Cleveland Browns. Anderson became the Browns' starting quarterback in 2007. He played for the Arizona Cardinals in 2010 and signed with the Carolina Panthers in 2011. He currently serves as the backup quarterback to Cam Newton and has only attempted four passes in three seasons with the Panthers. In 2007 Anderson was selected to the Pro Bowl and named the Pro Football Writers Association's Most Improved Player of the Year. He has 53 passing touchdowns and 55 interceptions for his career. 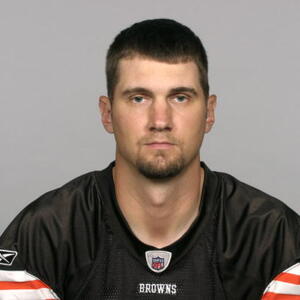