DeMarcus Lawrence net worth and salary: DeMarcus Lawrence is an American professional football player who has a net worth of $20 million. DeMarcus Lawrence was born in Aiken, South Carolina in April 1992. He is a defensive end who played at Silver Bluff High School. Lawrence played his college football for Boise State where he was first-team All-MWC in 2012 and 2013. He was drafted #34 overall by the Dallas Cowboys in the 2014 draft. DeMarcus Lawrence was named second-team All-Pro in 2017 and was selected to the Pro Bowl in 2017 and 2018. During his first five seasons he had 200 tackles, 34 sacks, nine forced fumbles, five fumble recoveries, and an interception. In his two years at Boise State DeMarcus had 120 tackles, 20 sacks, three forced fumbles, and an interception. In 2018 he had a base salary of $17.1 million. In 2019 that jumped up to $20.6 million. In April 2019, DeMarcus singed a 5-year $105 million deal with The Cowboys that comes with $65 million guaranteed and brings him more cash in the first year of a deal than any non-QB in history. In year one he will earn $31.1 million. Here's a breakdown of the money DeMarcus will earn from the near contract by year: 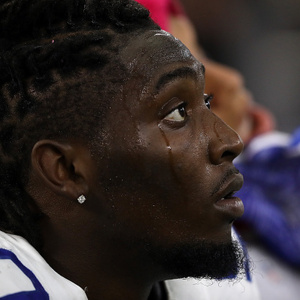