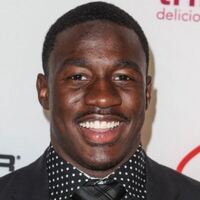 David Wilson Net Worth: David Wilson is an American retired professional football player who has a net worth of $6 million. David Wilson was born in Danville, Virginia in June 1991. He played football at George Washington High School and as a senior set a record for rushing yards and touchdowns in a season. He was named the Gatorade Player of the Year in Virginia. Wilson was part of the USA Football Under-19 National Team in 2009 that won the IFAF Under-19 World Championship and was named tournament MVP. David attended Virginia Tech and played for the Hokies under coach Frank Beamer. He set a school record in 2011 with 1,709 rushing yards and was the 2011 ACC Offensive Player of the Year. He finished his college career with school records for career yards per carry and most 100+ yard performances. At Virginia Tech he also ran track and helped the Hokies win the 2011 ACC Indoor Track and Field Championship. Wilson was drafted #32 by the New York Giants in the 2012 NFL Draft. He signed a four year deal for $6.68 million with a signing bonus of $3.3 million. He lost a fumble on his second career carry and was benched the rest of the game. In December 2012 he set the New York Giants team record for all-purpose yards in a game with 327. He also became the first NFL player with 200 kick return and 100 rushing yards in the same game. In week 5 he was placed on season ending injured reserve due to spinal stenosis. Wilson attempted to come back for the 2014 season but was ruled out for the year in August. He officially retired from the NFL and has worked as a guest analyst on ESPN.