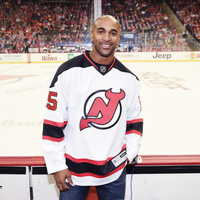 David Tyree Net Worth: David Tyree is a former American football player who has a net worth of $4 million. He managed to distinguish himself on the football pitch playing as a wide receiver in the National Football League (NFL) for seven years. Born David Mikel Tyree on January 3, 1980 in Livingston, New Jersey, he first started to play football in high school and continued to hone his skills playing college football at Syracuse University. He turned pro after he got drafted by the New York Giants in the sixth round of the 2003 NFL Draft. He remained with the team until 2008, after which he spent the 2009 season with the Baltimore Ravens. It was in 2005 that he earned a Pro Bowl selection as a special team's player, whereas he is best known for making the famous "helmet catch" in 2008 on the Giants' final drive of Super Bowl XLII. The latter resulted in the Giants scoring a last-minute touchdown, as well as a 17–14 victory over the previously undefeated New England Patriots.