David Krieg net worth: David Krieg is an American former professional quarterback who has a net worth of $10 million. David Krieg was born in Iola, Wisconsin in October 1958. He started out as the 7th-string quarterback from Milton College and went undrafted in the NFL. He signed as a free agent with the Seattle Seahawks where he played from 1981 to 1991.

He then played for the Kansas City Chiefs from 1992 to 1993, the Detroit Lions in 1994, the Arizona Cardinals in 1995, the Chicago Bears in 1996, and the Tennessee Titans from 1997 to 1998. Krieg was a three time Pro-Bowl selection and was named UPI Second-Team All-AFC in 1984. He holds Seahawks records for most games with 4 or more touchdown passes, most games with 5 or more touchdown passes, and most games with 400 or more yards passing. He also holds an NFL record for most seasons in career having played every play at quarterback in a year. Krieg was inducted into the Seattle Seahawks Ring of Honor in 2004. He is a real estate investor and motivational speaker and is part owner of the af2's Green Bay Blizzard. 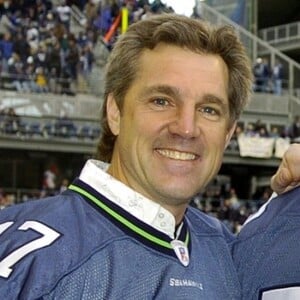