Dante Fowler net worth: Dante Fowler is an American professional football player who has a net worth of $9 million. Dante Fowler was born in St. Petersburg, Florida in August 1994. He is an outside linebacker who played at Lakewood High School. Fowler played his college football at Florida where he was first-team All-SEC in 2014 and second-team All-SEC in 2013. Dante Fowler was drafted #3 overall by the Jacksonville Jaguars in the 2015 NFL Draft. He played for the Jaguars from 2015 to 2018 and joined the Los Angeles Rams in 2018. During his first four seasons he had 83 tackles, 16 sacks, four forced fumbles, four fumble recoveries, and a defensive touchdown. Dante Fowler signed a four year deal for $23.5 million with a $15.3 signing bonus in 2015 and in 2019 he signed a one year deal for $14 million. He was arrested in 2017 for simple battery and committing mischief. 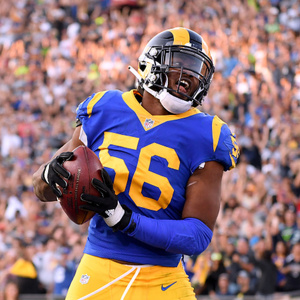