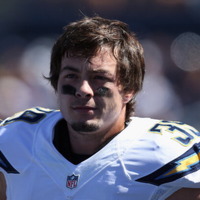 Danny Woodhead net worth: Danny Woodhead is an American professional football player who has a net worth of $5 million. Danny Woodhead was born in North Platte, Nebraska in January 1985. He is a running back who played at North Platte High School. Woodhead played his college football at Chadron State where he won the Harlon Hill Trophy in 2006 and 2007. He went undrafted but signed with the New York Jets from 2008 to 2010. Woodhead also played for the New England Patriots from 2010 to 2012, the San Diego Charges from 2013 to 2016, and the Baltimore Ravens in 2017. In 2011 he won an AFC Championship with the Patriots. Woodhead set many NCAA college football records including single season rushing and all-time rushing. In 2013 he signed a two-year deal with the Chargers for $3.5 million. In 2018 he was released by the Ravens and announced his retirement.