Dan Dierdorf Net Worth and salary: Dan Dierdorf is a former American football player and television sportscaster who has a net worth of $17 million dollars. Born June 29, 1949 in Canton, Ohio, Dan Dierdorf began his career as a guard and left tackle before settling in as a starter at right tackle in 1974.

He was named to the Pro Bowl 6 times from 1974–78 and in 1980. Dierdorf was named All-Pro for 4 consecutive seasons beginning in 1975 when the Pro Football Writers Association voted him All-Pro. From 1976–78 Dan was a consensus All-Pro and in 1980 the Newspaper Enterprise Association (NEA) named him All-Pro. In addition, Dan was a consensus 2nd team All-Pro in 1974. He was named NFLPA NFC Offensive Lineman of the year by his peers in '76, '77 and '78. In 1996 he was enshrined in the Pro Football Hall of Fame. After his retirement from playing, Dierdorf made the transition to the broadcast booth, becoming one of the first former offensive linemen to become a broadcaster. He also worked as a color analyst for Cardinals and Missouri Tigers games on KMOX radio in 1984 before moving to CBS, where he called play-by-play of NFL games in 1985 before returning to the analyst role in 1986. In 1987 he moved to ABC, where he was added to the Monday Night Football team with Al Michaels and Frank Gifford. He was also named as ABC's blow-by-blow boxing commentator in 1989. Dierdorf was the 2008 recipient of the Pete Rozelle Radio-Television Award from the Pro Football Hall of Fame and received the award on August 1 of that year during the Enshrinees Dinner in Canton, Ohio. On November 20, 2013, Dierdorf announced that the 2013 NFL season would be his last season as an analyst and on April 17, 2014, Dierdorf was introduced as the new color analyst for Michigan Wolverines football radio broadcasts where he would join former teammate Jim Brandstatter, who will handle play-by-play, on Michigan games.

Brandstatter was Dierdorf's backup on the offensive line, at strong tackle. 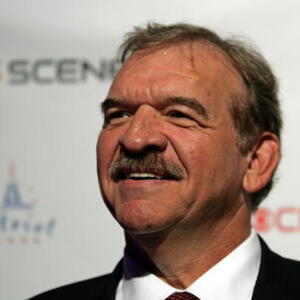