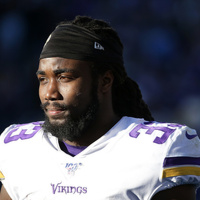 Dalvin Cook net worth and saalry: Dalvin Cook is an American professional football player who has a net worth of $20 million. He is best known for being a running back for the Minnesota Vikings.

Dalvin Cook was born in Opa-locka, Florida in August 1995. He is a running back who played at Miami Central High School where he was a USA Today High School All-American in 2013. Cook played his college football for Florida State. He won the ACC championship in 2014 and was a second-team All-ACC selection. Dalvin Cook was first-team All-ACC and first-team All-American in 2015 and 2016. He was drafted #41 overall by the Minnesota Vikings in the 2017 NFL Draft. Cook made the Pro Bowl in 2019. He finished his college football career as Florida State's all-time leading rusher. In 2019 Cook had career highs with 1,135 rushing yards and 13 rushing touchdowns.

In 2020 he signed a five year contract extension with the Vikings for $63 million.