Dallas Clark net worth and salary: Dallas Clark is a former American football player who has a net worth of $12 million dollars. Born in Sioux Falls, South Dakota on June 12, 1979, Dallas Clark is best known for playing as a tight end in the National Football League. He played for the Indianapolis Colts from 2003 to 2011, the Tampa Bay Buccaneers in 2012, and the Baltimore Raves in 2013.

He stands at six feet and three inches and weighs approximately 252 pounds. He attended Bode Twin River Valley High School as well as the University of Iowa. He made his NFL debut in 2003 with the Colts after being drafted as a round one, 24th pick. He played in the Pro Bowl and was named an All-Pro in 2009, became a Super Bowl champion at XLI, is a two-time AFC champion for the years 2006 and 2009, and was named NFL Alumni Tight End of the Year in 2009. His career statistics include 505 Receptions, a total of 5,665 receiving yards, a receiving average of 11.2, and 53 receiving touchdowns. He is currently married to Karen Clark and has one son by the name of Dane. They currently live in Livermore, Iowa as well as Zionsville, Indiana. Clark has made a handful of television guest appearances including an episode of Criminal Minds. He retired after signing a single-day contract with the Colts so that he may end as one of their roster. 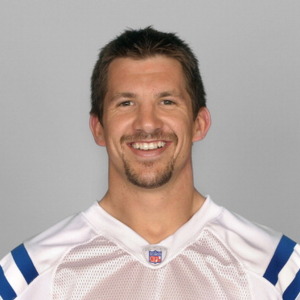