Cris Carter net worth: Cris Carter is an American retired professional football player who has a net worth of $9 million. Cris Carter was born in Troy, Ohio in November 1965. Cris attended Middletown High School where he was a star in football and basketball. He was heavily recruited and chose to attend Ohio State.

As a wide receiver Carter was a consensus All-American in 1986. He has been named as a member of the Ohio State Football All-Century Team and was inducted into the Ohio State Varsity O Hall of Fame. Carter was drafted by the Philadelphia Eagles in the 4th round of the 1987 NFL Supplemental Draft. He played for the Eagles from 1987 until 1989 before being claimed by the Minnesota Vikings where he played form 1990 to 2001. Carter finished his career with the Miami Dolphins in 2002. During his NFL career Carter was selected to eight Pro Bowls. He was a two time First-Team All-Pro and was a Second-team All-NFC and Second-team All-Pro. Carter finished his career with 1,101 receptions for 13,899 yards and 130 touchdowns. In 1994 he was named the Bart Starr Man of the Year. In 1998 Carter was named the "Whizzer" White NFL Man of the Year and in 2000 he was named NFL Alumni Wide Receiver of the Year. Carter was named to the NFL's 1990s All-Decade Team and as one of the 50 Greatest Vikings. He was also named to the Minnesota Vikings 40th University Team and he has been inducted into the Vikings Ring of Honor and had his #80 retired. Carter was inducted into the Pro Football Hall of Fame in 2013. After retiring he has worked as an analyst for HBO's Inside the NFL and for ESPN's Sunday NFL Countdown and Monday night Countdown. 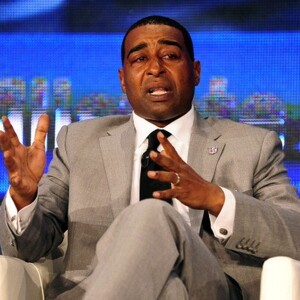