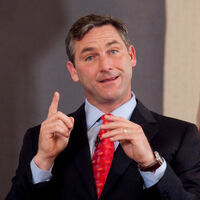 Craig James net worth: Craig James is a former American sports commentator who has a net worth of $3 million. Most recently he appeared on the ABC and ESPN television networks. Craig James was born on January 2, 1961 in Jacksonville, Texas. He attended Stratford High School in Houston, and set the single-season Texas 4A rushing record with 2,411 yards in 15 games. He also played baseball and was offered a contract by the New York Yankees out of high school, but decided to attend Southern Methodist University to focus on football instead. Along with Eric Dickerson, he formed part of "The Pony Express" running back tandem, and also took over punting duties his senior year, finishing sixth in the nation in punting. Craig James also played on one of the SMU teams involved in the team's football scandal, and in 2012 he admitted he received gifts while playing at the school. After graduating, he was drafted by the Washington Federals in the inaugural draft of the USFL, and was also selected by the New England Patriots in the seventh round of the 1983 NFL Draft. After one season with the Federals, James joined the Patriots in 1984 and remained there throughout his career, until 1988. His career was plagued with injuries, and he finished five seasons in New England with 2,469 rushing yards, 819 receiving yards, and 13 total touchdowns. After retiring, James has worked as a radio analyst for SMU college football games, the sports anchor for KDFW-TV, a studio analyst for ESPN, CBS and ABC. He announced in 2011 that he was leaving ESPN to run for the United States Senate, a campaign he lost in 2012.