Corey Dillon Net Worth: Corey Dillon is a retired professional American football player who has a net worth of $11 million. Corey Dillon was born in Seattle, Washington, in 1974. His college football career began in the junior colleges and he attended the University of Washington for one season before turning pro.

In 1997, the Cincinnati Bengals selected Dillon with the 43rd overall pick in the second round of the NFL Draft. The six-foot-one running back played for the Cincinnati Bengals until 2003; he set the NFL rookie rushing record for yards in a single game. He was a three-time Pro Bowler in Cincinnati and even claimed the NFL record for most rushing yards in a game, breaking Walter Payton's record which had stood from 1977 until 2000. After the 2003 season, Dillon was shipped to the New England Patriots in exchange for a second round draft pick. He was part of the Patriots' Super Bowl winning team in Super Bowl XXXIX; Dillon rushed for 75 yards and one score during the championship game. He was released in early 2007 and has not placed since. Dillon finished his career as a four-time Pro Bowl player and as a member of the New England Patriots All-2000s Team. He was a First-team All-American selection in college. He joined the 10,000 Rushing Yards Club, finishing with 11,241 yards on the ground and 82 touchdowns. Dillon has three daughters with his wife, Desiree, who filed for divorce in 2010. A month after the papers were filed, Dillon was arrested for allegedly assaulting her at their home near Los Angeles. 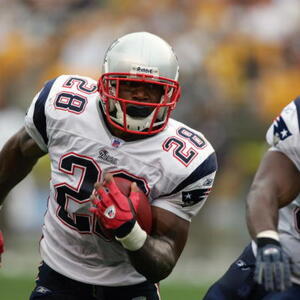