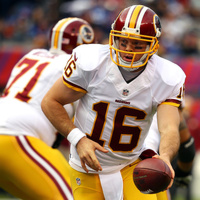 Colt McCoy net worth: Colt McCoy is an American football player who has a net worth of $5 million dollars. Born in September of 1986, Colt McCoy is best known for playing quarterback in the National Football League for the Washington Redskins. He has played professionally since 2010, when he was first drafted in the third round by the Cleveland Brows. Previously, he played college football for the D1 and football powerhouse school, the University of Texas. Since leaving college ball, he also played a short time for the San Francisco 49ers. During his time with Texas, he served as the starting quarterback from 2006 to 2009, while winning various awards. He was also nominated for the Heisman Trophy in 2008 and 2009, serving as a finalist in 2009. During his final year with the Longhorns, McCoy won 13 out of 15 awards that are awarded to only top college players, including quarterback of the year. He enjoys multiple outdoor activities, including hunting, fishing, and playing golf. In 2006, he made headlines when he swam 300 yards across a lake to help a man who was having a seizure. In 2009, he was asked to greet former president George W. Bush back to Texas after he won his second term. In January of 2010, he became engaged to girlfriend, Rachel Glandorf, after proposing on-screen at his college's football stadium. The two were wed in July of that year.