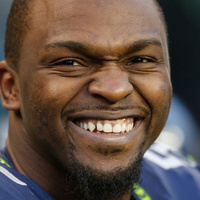 Cliff Avril net worth and salary: Cliff Avril is an American football player who has a net worth of $10 Million. Cliff Avril currently plays defensive end for the Seattle Seahawks. Avril was born on April 8, 1986 in Jacksonville Florida, and attended Clay High School in Green Cove Springs. Avril was named second-team All-State during his senior season. After graduating, Avril attended Purdue University. Throughout his collegiate career, he started 12 games at linebacker and 23 at defensive end. Cliff Avril was drafted by the Detroit Lions with the 92nd pick (third round) of the 2008 NFL Draft. In 2008 he recorded 23 tackles and five sacks, and was named to the Sporting News All-Rookie team. In 2009, he finished with 41 tackles and 5.5 sacks. Avril continued improving in 2010, with 33 tackles and 8.5 sacks. In 2011, he appeared in all 16 games for the first time in his NFL career, finishing with 36 tackles, 11 sacks, six forced fumbles and three fumble recoveries, including one returned for a touchdown. He also returned an interception for a touchdown during the 2011 season. In March 2012, the Lions placed the franchise tag on Avril, keeping him in Detroit for one more season. He finished with 35 tackles, 9.5 sacks and two forced fumbles. In March 2013, Avril signed a two-year contract with the Seattle Seahawks. In his first season for Seattle, he appeared in 15 games, posting 20 tackles, eight sacks and five forced fumbles.